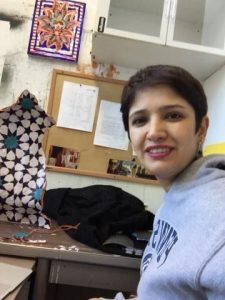 Born in Iran, In1984, Elham Hajesmaeili received a BFA in Handicrafts from Shiraz University in 2002, and received a MA in Art studies from University of Art, Tehran, Iran in 2010. She held some Group and solo painting exhibitions in different cities of Iran. Currently she studies and works at Penn State University as a graduate student. From 2015 when she arrived in the United States, Since she is experiencing living in a liminal space between Iranian and American cultures, she has continued her works based on the identity issue. Her works represent an observation of an identity shifting between two geographical context, while sexuality remains the silent power holder.