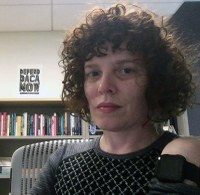 In Affective Intellectuals and the Space of Catastrophe of the Americas (Ohio State University Press, 2018), she weaves together five different contexts (Mexico, Chile, Puerto Rico, Cuba, and the U.S.-Central America relationship) to argue that there is an intellectual tradition in the Americas rooted in the stories, desires, and needs of those who have been systematically pushed out of the public sphere (indigenous peoples, Afro-descendants, immigrants, LGBTQ sexualities, and inhabitants of poverty). This argument leads the author to analyze a number of writers whose emotional discourses during catastrophic circumstances have had a measurable impact on the formation of communities that organize civil efforts to surpass a crisis and, even more, to demand their full political inclusion in society.

Currently, she is working on a second monograph, entitled Mongo Heroes: Laboring Vulnerable Masculinities for Anti-Colonialism in Puerto Rico. In this project, she proposes that a number of women's, gay men's, and transmen's reproductive labor has created vulnerable (old, ill, or maimed) representations of anti-colonialist male fighters that contradict the portrayal of a normatively strong leader guiding Puerto Rico towards independence from the United States. Through the identification and examination of what she calls a mongo (limp) hero in a series of twentieth-century literary and artistic productions, she analyzes political junctures where vast consumption of this labored masculinity has being at the center of ephemeral consensuses on the precarity of the colonial condition among Puerto Ricans in the island and the diaspora. This analysis guides her in arguing that the laborers of mongo heroes have been the true revolutionaries working for a Puerto Rican sovereignty that can defy, not only U.S. imperialism, but capitalist and neoliberal economic and environmental catastrophes, too.

Along with her colleagues Krista Brune and Maria Truglio, Sierra-Rivera is also developing a digital humanities project on Latina, Brazilian, and Italian women living in central Pennsylvania. The project concentrates on tracing an oral history, through interviews of women from these ethnic backgrounds, that can inform us of migrations to the USA that have been less studied. This collaborative project aims to establish a more fruitful relationship between Penn State and the communities of Centre County. The leading researchers are working, too, to integrate the gathered knowledge to the teaching of Spanish, Italian, and Portuguese languages and literatures.