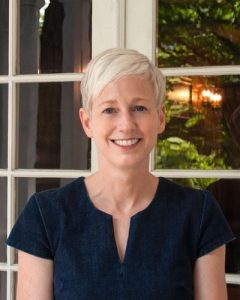 Jessica Vantine Birkenholtz is Associate Professor of Women’s, Gender, and Sexuality Studies and Asian Studies. She specializes in women and gender in South Asia, particularly in Hindu societies and cultures. She has been doing research in Nepal since the early 2000s, where her work centers primarily on the construction and intersections of Hindu religious and gender ideologies, identity, and practice in and around the Kathmandu Valley. She is interested in the processes through which ancient and medieval texts, practices, and ideology, especially gender ideology, continue to manifest and are challenged in the modern, secularizing Hindu world.

Her book, Reciting the Goddess: Narratives of Place and the Making of Hinduism in Nepal (Oxford University Press, 2018), which earned the 2019 American Academy of Religion Award for Excellence in the Study of Religion in the Textual Studies category, presents an archival and ethnographic study of Nepal’s local goddess Svasthani, the widely read Svasthanivratakatha, and the role both goddess and text have played in the construction of Nepali Hindu identity and practice. Following the interest generated by Reciting the Goddess, she is working on The Secret Vow to the Goddess, an English translation of the Svasthanivratakatha, a project supported by an NEH Scholarly Editions and Translations Grant and under contract with Oxford University Press.

A second new book project draws on her broader interests in gender and religion to present an ethnographic, intersectional study of the third gender and sexual and gender minorities in Nepal that uses religion as its primary lens and attends to the intersections of religion, secularism, ethnicity, and sexuality in modern Nepal. Her work has also been published in Signs: Journal of Women in Culture and Society and the Journal of Hindu Studies, and she is co-editor of Religion and Modernity in the Himalaya (Routledge 2016).