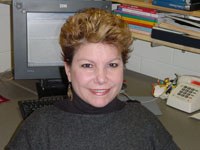 Dr. Roselyn Costantino is Professor of Spanish and Women's Studies and 2011 Fulbright Scholar at La Universidad del Valle, Guatemala. She received her M.A. from Montclair State University (1988) in Spanish Peninsular Literature with a focus on 19th-century Spanish and Latin American narrative, and her Ph.D. from Arizona State University (1992) in Spanish with specialization in Latin American theatre and narrative; Latin American Studies; and Women's Studies.
Her areas of specialization include Feminist Theory; Performance Studies; Rape in War; Violence against women and femicide in Guatemala; Latin American Writers, Playwrights, and Performance Artists; Latin American and Latina Women in creativity and resistance; Latin American Studies. Her most recent publications include Holy Terrors: Latin American Women Perform (co-edited with Diana Taylor. Duke UP, 2003); "Guatemaltecas Have Not Forgotten: From Victims of Sexual Violence to Architects of Empowerment in Guatemala" in Rape: Instrument of War and Genocide, Eds. John Roth, Carol Rittner; Femicide, Impunity, and Citizenship: The Old and The New in the Struggle for Justice in Guatemala (Chicana/Latina Studies 6.1 Fall 2006); "Politics and Culture in a Diva's Diversion"; "Youth Movements in Mexico: Indigenous Youth of the Zapatista Rebellion"; and "Preserving the American Way of Life." She is completing a manuscript, "There are many ways to kill a woman": Structural Deformities, Femicide, and Transformative Collaboration in Guatemala's Narrative of Extreme Gendered Violence. She is a member of the Altoona College Arts and Humanities faculty; Women's Studies Faculty; and the University Graduate faculty.